That Time We Set Some Goals

How did we get here?

I mean, I know how we got here, but really? How is it December already? 2016 leapt into the atmosphere 335 days ago, hit the ground running, and never looked back.  The number of times people said they were done with 2016, that 2016 was the giver of no f*cks, flying figs, or good got-dambs ticked up and up and up, faster than a real time population counter in a rabbit hole.

On the radio the other day,  I heard Jeff Johnson from the Rickey Smiley Morning Show share with his listeners his daily “3 Things You Should Know”.  His focus was on how to build your department of defense in Donald Trump’s administration. I am oversaturated with everything to do with the pre- and post- election cycle as I am sure most everyone else is.  For some reason, instead of flipping through the channels for something that would have me lip syncing at the traffic lights, I I listened to what Jeff Johnson had to say as I motored through my morning commute.

The analogy that Johnson was going for was simple: the president-elect is preparing to take office next year; we, too, should be preparing ourselves for next year.  We should be building our defenses against those who won’t let us be great.   Johnson provided tips on how to bolster and better ourselves as we cross the threshold of 2017 and beyond.  His tips that focused less on losing weight or flossing every day, and more on goal setting in general.

We have about 30 days before the New Year: now is the time to set goals so that on December 31st, we’re heading into the new tomorrow ready to hit the ground running.  No excuses. You know I love some proper prior planning, so my ears perked up. I encourage you to listen to the audio; it’s brief but impactful.  In the interim, here’s my takeaway and how I plan to be a #goaldigger in 2017.

Building for yourself.  Johnson asks his listeners what they will build in the new year.What are you going to create for yourself in the New Year? Is it a new job? Educational advancement? Are you committed to being a better partner, parent, person?

Whatever goal you have for the next 365 days, there is no time like the present to go after it. It’s too easy to rest on our laurels and plan to tackle that fitness plan, commitment to flossing, sign up for room parent, or what have you.  Don’t wait for Friday (who starts a fitness plan at the beginning of the week-end anyway?), or the first of the month (looking at you, January), or when you’re bank account is just right, or the when the moon is in the seventh house.  Stop waiting for the right moment and act.

Right now, I challenge you to grab a post it note and write down one goal for yourself. One goal, just for today.  Here’s mine: 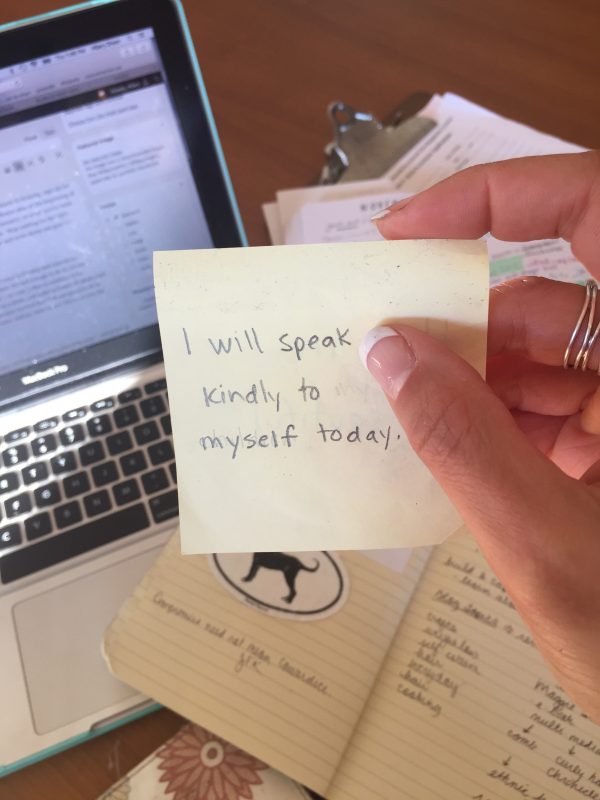 Long term goals? I’m going to be kind to myself. I’ll floss.  I will look for ways to develop and express my creativity.  Once I find those ways, I’m going to act on them. It’s not enough to do the research; you’ve got to do the work.  I’m planning on being great — no wait, I plan to continue to be great.

2017 is sidling up to us at the bar ready to buy us a drink and make us forget all about 2016.  Well, bottom’s up, baby, and here’s to our goals for the new years: may we set them, may we smash them, may we keep the momentum going!

What are you going to let go of, use to build your defenses, and create for 2017?