That Time I Got A Camera Up My Nose

A few weeks ago, I started having this weird experience involving my nose.  Every so often, I would catch a whiff of cigarette smoke.  No matter where I was, no matter what I was doing, it was like someone was walking past me, taking a drag.  It was so bizarre and I thought I was going nuts.

It happened one night at dinner and I asked my family if they smelled anything. Nope, nope, nope, and nope.  I asked them if it smelled like something was burning or like someone was smoking.  After a few incredulous looks in my direction, they again said, “Nope” and moved onto their dessert.

A few more days passed and I really thought I was going crazy. So, I did what any person on the verge of insanity does: I Googled my symptoms.

Scarysymptoms.com? Really? I shouldn’t have even clicked on this, especially when my eye went immediately to the word tumor. And then, because I’m an idiot, my brain went:

So, I closed the computer, picked up the phone and called my doctor.  After I spoke with her at length, she said she wanted me to come in for some neurological testing. Then my train of thought went, “My brain is broken, my brain is broken.” Thankfully, the neurological tests showed that my brain was not in fact broken. I’m healthy, I’m just experiencing this weird olfactory issue.

Prior to this happening, I had gone out to eat with some friends in downtown RVA.  The restaurant was situated next door to a live music venue.  While the restaurant was non-smoking, a thin gauze of smoke permeated the air.  According to our waitress, the restaurant and the music venue shared the same ventilation system. Even though no one was smoking in the restaurant, everyone was smoking in the venue and that air was getting cycled through the vents.  Now, I’m not a medical professional, but I did think that there might be a connection between that prolonged exposure and my current situation.  I shared that with my doctor who promptly said, “Yeah, no.”

I guess I would have felt a little better trying to find a source of the problem, which would have meant being able to pinpoint a course of action.  Well, that didn’t happen. What did happen was I left the doctor’s office with instructions for flush my nose out with saline spray and Flonase, every morning, and then go see an ENT for a follow-up.

The cigarette smell wasn’t abating, so I made the appointment, even thought my past experiences with ENTs have been less than stellar. See, when I was around 7 or 8, I used to get horrible nosebleeds with an alarming frequency.  My mother took me to see an ENT,who determined the blood vessels in my nose were weak, and then proceeded to cauterize them to prevent further nosebleeds.  For those of you who are unfamiliar with the term cauterize, let Google break it down for you.

cau·ter·ize ˈkôdəˌrīz/
verb: burn the skin or flesh of (a wound) with a heated instrument or caustic substance, typically to stop bleeding or prevent the wound from becoming infected.

With a heated instrument.

And here we are 30 years later, the memory is just as fresh as when it happened.  So, a trip to the ENT wasn’t something I was looking forward to, but it had to be done.

About two weeks after I saw my doc, I found myself in the ENT office.  I waited. I waited. I waited.  I decided to go to the restroom.  As I exited the stall, this older woman exited the stall beside me.  I walked forward to the sinks to wash my hands, she walked to the right to exit the restroom.  My eyes widened as I watched her in the mirror, reaching for the handle of the door.  She stopped momentarily, and I thought she realized I caught her about to bounce without washing her hands.  She then shot out one hand, the motion activating the hand dryer on the wall beside the door.  The hand dryer burped into life and then abruptly cut off as she withdrew her germy digits.  The door was flung open and she left.  I washed my hands and shook them out before using the hand dryer.  I then looked around for some paper towels with which to open the door, and seeing none, went back into the stall to grab some toilet tissue.  Using the tissue, I opened the door and walked back to the ENT office, jamming the wadded up squares in my pocket.

Finally, I was called back to the exam room, where I gave my reason for being seen to the nurse.  She left and a nurse practitioner came in. I repeated why I was there for her benefit, even included my thoughts about the restaurant/recycled air scenario, to which she replied, “Yeah, no.”

She then gave me a thorough exam, pulling and prodding my ears, nose and throat.  She even slipped on one of those reflective mirrors, like this one. 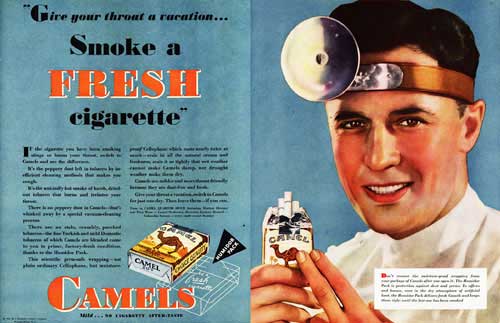 the irony that this is an ad for cigarettes is not lost on me.

I almost laughed when she put it on because I thought those things were relics of the 50s and 60s.  Evidently, they’re not. After she dug around in my ears, pulled out my tongue, checked out my “tiny tonsils” and palpated all my sinuses, she said she was going to numb my nasal cavity and back of my throat so they could use their camera for a more in depth examination. And that’s when she took what looked like the airbrush guns they use at the nail salons to spray the most nasty tasting numbing agent up my nose at a velocity usually reserved for NASA launches.

After the numbing agent kicked in, the ENT doctor joined us.  I told him my reasons for coming in, including my thoughts on the correlation between the restaurant and the smell, to which he replied, “Yeah, no.”  His take was more succinct and less conclusive.  Basically, weird things happen and we don’t know why.  No, really.  His rationale was that sometimes we smell things similarly to the way we something get an itch on the back of our head.  It just itches and then it goes away. I smell cigarette smoke and then it goes away. He wanted to rule out the possibility that it was something nefarious resting on my olfactory bulb, hence the need to use the camera.

And that’s when the nurse came at me with what looked like a metal conductors baton.

I don’t know what I thought was going to happen, but I can tell you, I definitely didn’t think it was going to be that.   They threaded that monster up my nostril  and then had the nerve to tell me to, “Relax and breathe normally.”  Yeah, no.

Now, I’ve had my wisdom teeth taken out, two root canals, knee surgery, three c-sections, and three operations my ankle.  This sinuscope up my nose was by far the worst medical procedure by far. They were really trying to scratch my brain through my nose.  I tried to keep the various other procedures in mind while they inserted and twisted and tried to get the best angle with camera, but it was tough.  And it because we’ve all got two nostrils, there were two rounds of this fun, fantastic routine.

The upside to the whole thing, however, was that they didn’t see anything unusual. I have very healthy sinuses and nasal passage (slow clap for me). To rule out any and all possibilities, the doc ordered a CAT scan, which, thankfully, was done in office that very day.  Aside from my hair getting caught in the CAT scanner (natural hair, head stabilizers using velcro and a rotating scanner do not mix), the scan was simple.  Again, no abnormalities, healthy sinuses and nasal passages.  After the doc review my films, he re-iterated that this olfactory disturbance really didn’t have a cause, which meant there wasn’t much he could do to alleviate it.  He said that they usually get one or two patients a year coming in with the same problem, but none return, either because the situation resolves itself on it’s own or they learn to deal with it (gee, that’s encouraging).  Ultimately, he told me, no one has come to him saying that it’s impacted the quality of their life.

That wasn’t really what I wanted to hear, but after having been through the previous ignominies, I just wanted to get out of there.  So, I grabbed a tissue to blot my runny nose and left.  As I was walking out of the office, I blew my nose on the tissue and was surprised to see it was bloody.  I always look in my tissues after I blow, it’s so childish and gross, I know, but I can’t help it.  The amount of blood surprised me, as did the accompanying trickle that started shortly thereafter.  In no time, the tissue was full and I was desperate for another.  There were tissues in my car, and my car keys were in my pocket, so I stuck my hand inside to retrieve them. What I grabbed instead was another wad of tissue, which I immediately brought to my nose to staunch the flow.

Then I realized it was the tissue I had used to open the gross door from the bathroom.

I don’t think saline spray or Flonase can’t help this one.

What’s the strangest medical procedure you’ve had? Tell me about it in the comments!