That Time It Was Christmas

I remarked to a friend the other day that I have been in a perpetual state of anxiety since Halloween. That’s when I first noticed the Christmas decor popping up around the mall. With each passing day, more and more holiday themed sales and wish list reminders leapt out from the TV and the radio.  By mid November, my blood pressure was up.  By Thanksgiving week,  I would break out into a flop sweat every time I walked past our mailbox.  The deluge of  Black Friday, Cyber Monday, and Giving Tuesday holiday circulars kept our mailbox from closing properly.

December finally arrived, and with it came an explosion of Christmas lights throughout the neighborhood.  There was a series of holiday themed activities at school every week, and Mariah Carey’s all time smash on steady repeat on every single radio station.

Yup, no tree this year. It’s kind of weird. It’s so weird, that I’ve resolved that once we move into the next house, we’re going all out.  We’re having lights inside and outside! Musical inflatables in the yard! We’ll cut down our own tree! Heck, we’ll have multiple trees each with a different theme, and The Trans Siberian Orchestra’s version of Carol of Bells as our doorbell chime!

I’ll get an Elf on the Shelf!

I got carried away for a second.

What I enjoy most about Christmas, aside from the cookies and rum balls, are the traditions that come with it.  As a kid, I would make my Christmas list using the Sears catalog as a guide.  SN: the Sears Company came out with a phonebook sized “Wish Book” every holiday season. While it had pretty much every item that Sears offered, from sewing machines and lawnmowers to industrial grade brasseires and power tools, that tome was also chock- full of toys and games. I can clearly remember lying on the floor of my room, the Wish Book’s pages dog-eared from where I had spotted the toys I hoped to get.

After a Christmas Eve dinner of Chinese food, my parents would let me open one gift before bed.  As I got older, although the Sears catalog stopped coming, my wish list was still pretty long.  The Chinese food dinner remained and was followed popping The Long Kiss Goodnight into the VCR.

You’ve not truly celebrated Christmas until you’re bundled up on the couch with your mom and some egg nog, the Christmas tree winking and blinking from the corner, and Samuel L. Jackson on the TV saying, “I ain’t handsome, I ain’t rich, and the last time I got blown, candy bars cost a nickel’.”

I can’t even begin to explain how this movie became annual Christmas viewing for us.

Since M, C, and V burst onto the scene, our traditions have changed.  There’s an annual holiday card. There’s the letters to Santa. There’s the decorating of the tree while we listen to Mele Kalikimaka and the Hubs favorite, Christmas in Killarney.  There are matching Christmas dresses made by Grandma and advent calendars.  We still have Chinese food on Christmas Eve and the girls get to open a gift before bed.  The Long Kiss Goodnight has been retired in favor of whatever Christmas movie is on. I’ve tried to get The Christmas Story or The Grinch or even A Charlie Brown Christmas into the mix, but none of the girls are interested in those classics.  One year, I wanted to start an annual reading of Christmas poems from the book “Under the Christmas Tree”. They threatened to call CPS if it even looked like I was going to spout off some iambic pentameter.

*le sigh* So much for bringing culture to the masses.

On Christmas morning, there’s egg nog (lots of egg nog).  As a nod to the Hubs side of the family, we have a traditional Jamaican breakfast made by the Hubs. 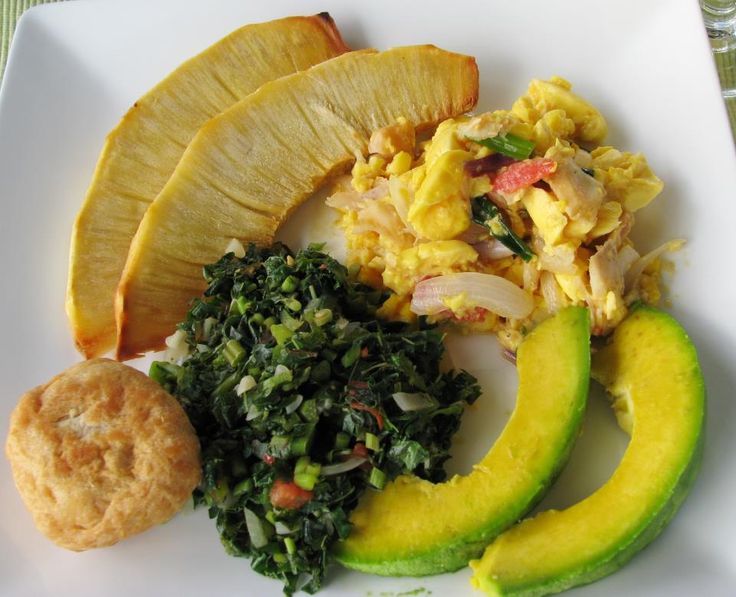 Even though this Christmas will be different for us, I’m not giving up on the traditions.  The Christmas cards went out.  The Christmas lists have been made and shared with the grandparents.  We’ve drunk copious amounts of egg nog, popped open the doors on the advent calendar, and danced around to Bing Crosby. There’s even a wreath on the door.

As that for that traditional Jamaican breakfast? We’ll be having it in Jamaica this year.  That’s a tradition I can get behind.

What holiday traditions does your family enjoy?

Tell me about it in the comments!