Several weeks ago, I read a post on Facebook that came from a natural hair board to which I belong.  The author of the post was asking other group participants to leave some kind words for a young curly cutie who had been subjected to some hurtful comments from other school kids because she had been wearing her naturally beautiful ‘fro.

From the message board:
“My little sweetheart, Boom (the pretty girl in the pic) has been rocking her natural beautiful ‘fro to the first grade and of course, kids will be kids and some have said some unkind things about her glorious crown. Her mom is working hard everyday to remind her how wonderful she looks but will you please leave a comment to encourage her to rock her beautiful mane?! Her mom will read each one to her tonight before bed. Thank you!!”

I had an extremely strong reaction to this post. I ached for what that little curly cutie must have been feeling. Despite being a grown woman, I can recall quite easily what it was like to be the recipient of questions and unwanted attention because was my hair was different from my classmates.  Keep in mind, this was a time before being natural was as prevalent as it is now.  The comments and questions directed at me sprouted up whenever I changed my hairstyle (Braids one day! Ponytails the next! How does she do it?!) or when the humidity in the air snapped my ponytails into huge poofs (What happened to your hair?! and Your hair looks like a cotton ball!).  My mother would tell me things like, “People are afraid of what they don’t understand,” and “They say hurtful things because they are jealous. They are envious of what you have.”  At the time, it was little consolation, but now, I can appreciate how my mother did the best she could to assuage my feelings.

Now that I’m a mother, I think about how I would react if one of my girls were experiencing a similar situation. Believe me, the immediate response involved making sure elbows found soft spots on a big mouth’s body.  No, not really. . .but I did get very Mama Bear for a split second before coming up with possible strategies that my girls could employ if they did come home with tales of “So-and-so said such-and-such about my hair!”  The Hubs and I spend lots of time, consciously and unconsciously, building up our girls in all areas so that they never doubt how wonderful they are.  I irritates me to no end how despite our love and messages of positivity, one wayward comment from a passing acquaintance can unravel the threads of our work.  I’d like to believe that with every kind word we provide our children, we inoculate them just a bit more against low self-esteem so that eventually, any unpleasant comments bounce right off, never finding purchase.

I don’t know Boom’s mother, but I’m sure she cycled through various emotions of outrage and indignation before settling on ways to help her daughter.    I was encouraged by how thoughtfully her mother worked to ensure that Boom knew that she was beautiful. Taking to social media to enlist the help of other naturalistas was a great idea.    I was filled with hope as I read comment after comment lifting up this little girl.  The last time I checked, there were over 162 likes and over 125 comments, and they keep coming.

After I had read through the comments, it occurred to me that this is not the first time that I have heard of a little girl being teased, ridiculed, shamed, or even suspended from school over her hair. After seeing C wearing her Bantu Knots one day, a friend of mine replicated the style for her daughter.  The daughter, a middle-schooler, came home after wearing her knots, saying she was was going to take her hair down because the kids at school had said her hair looked like . . .well, I’m not even going to give power what was said.  Suffice it to say, it was enough to have her want to change her hairstyle immediately.  When I talked to my friend about it, we both said how by unraveling the knots, she was giving power to her tormentor.  Of course, being at the precarious middle school age, nothing a parent or a well meaning adult is going to hold sway over the system that is tween-dom.  So, she took her hair down.

There were at least two other news articles in the recent months where young curly cuties were asked to 1) change their hairstyles or 2) suspended from school for not conforming to school dress codes for having “unkempt hair” (i.e. naturals).  Both of those instances are discussions for other posts, I’m sure.  I bring it up to say, though, situations like those mentioned above, situations like Boom’s, situations that I’m sure my own children will face at some point in their lives — this is why I wrote “Maggie Sinclair”.  It’s more than just a picture book. It’s more than just a story about a girl and her grandmother. It’s a lesson in positivity so that children of color can have good examples relating to their hair, bodies, and abilities. It is crucial that they are taught to love themselves and the hair that grows out of their head.  In so doing, they can learn to love and celebrate their uniqueness and the uniqueness of others.

I asked to be put in touch with Boom so that I could send her a copy of  “Maggie Sinclair, Will You Please Fix Your Hair?” as a gift.  I wanted Boom to  have a touchstone that will remind her to continue to love, love, love herself and that gorgeous curly crown.  Judging by this photo, I think she’s most certainly will. 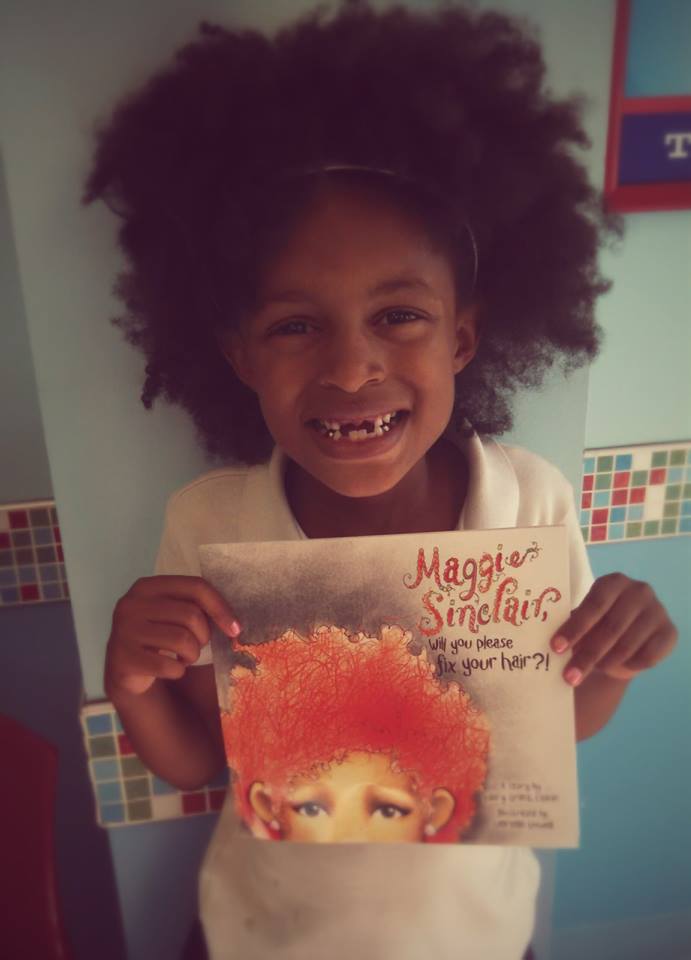