Once upon a time,  we took the kids to Disneyworld. 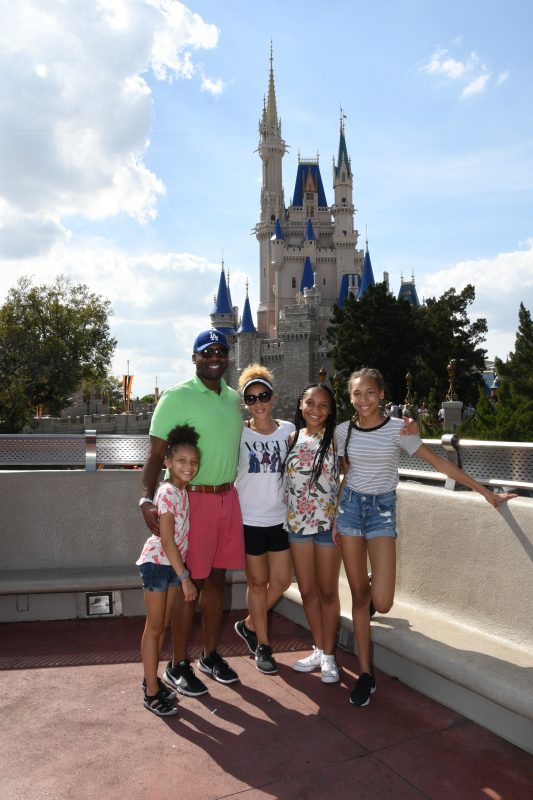 It seems like it was a lifetime ago, but in all honesty, it was two weeks ago.  Yup, two weeks ago — before things like social distancing, sheltering in place, and gubernatorial orders to stay at home for the foreseeable future.

Our trip fell on the only common week-end between the girls’ respective spring breaks.  We hit the ground running upon arrival on Thursday, determined to pack in the absolute most over the course of our three day stay.

On our last night, my husband had planned for us to have dinner at Epcot: Dinner at Chefs de France followed by a Frozen Ever After Dessert Party with Fireworks and Showcase!  The restaurant was in “France”, at on one end of the park, and dessert was in “Arendelle”, on the other end of the park. Or at least it seemed like it was on the other end of the park, the amount of walking we did.   Honestly,  when you don’t know where you’re going, it all seems like it’s in a kingdom far, far, away. And, because the girls had no idea where they were going either, they serenaded us as we made our way. 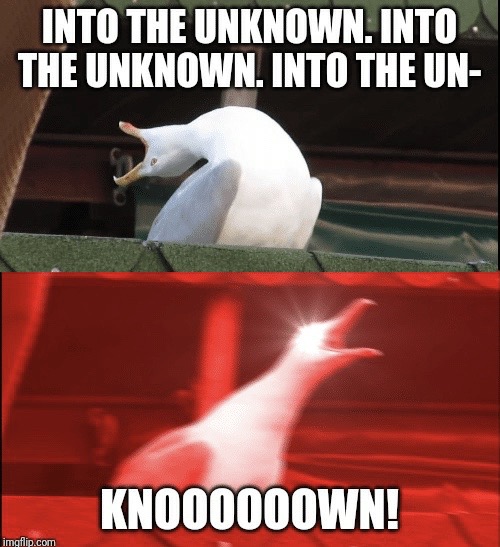 Let me just say that while the girls enjoy Disney, they aren’t super Disney fans.  At best, they’re Disney admirers. They love the classic movies and are all in for the live action remakes.  Two are huge fans of the princesses and cuddly sidekicks, while one prefers villains and more under-appreciated characters.  When it comes to live action films like Mary Poppins and Bedknobs & Broomsticks, they’re pretty lukewarm. Trying to explain how Star Wars is now part of the Disney Empire required a TedTalk, a TikTok, and a flow chart.  While I did  get each of the girls’ mouse ears for our trip, I’m pretty sure Mickey and Minnie don’t even crack the top ten list of their favorite characters. For one of the girls, though, Goofy is where it’s at. 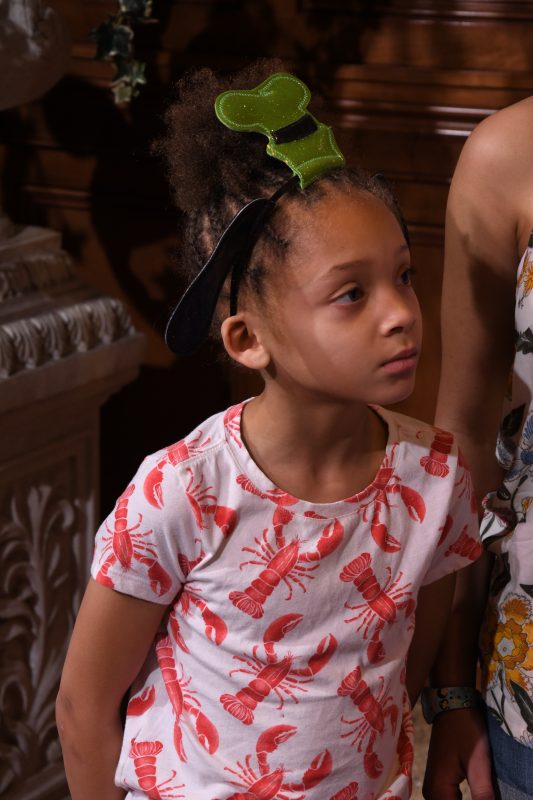 Case in point:  As we tooled through Magic Kingdom on our second day, we saw Mickey and Co. atop floats during the Main Street Parade Extravaganza. We stopped briefly to watch the costumed cast members do the Twist and the Macarena under Florida’s beaming sun. We clapped along, waved to the Mouse and his best girl. I was prepared for the children to ask to get photos with the M&M, but surprisingly, no one was interested. Instead, we did a meet and greet with Rapunzel and Princess Tiana.

Between photo snaps, M poured her heart out to Tiana, saying how important it was for her to see a princess of color on the big screen when she was a child.  “Representation matters,” M said as Tiana nodded at her sagely. 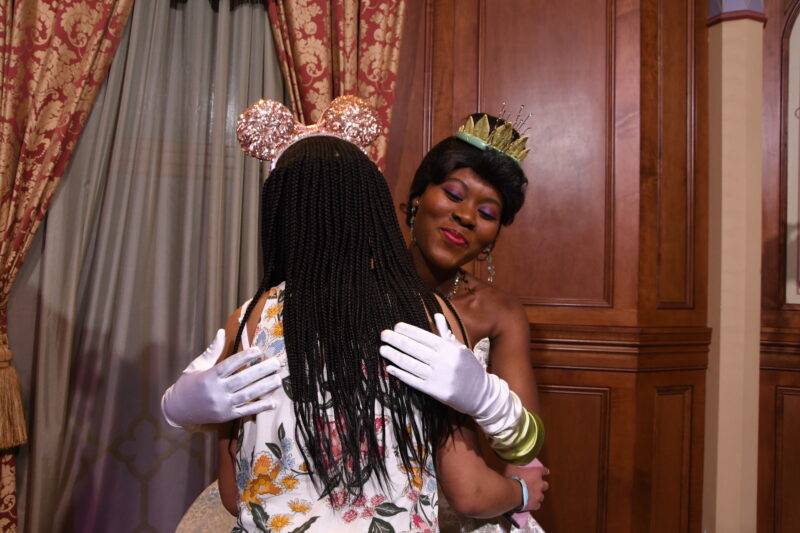 Throughout our time at Disney, V would periodically stop to pick up random pieces of flora off of the ground. Bits of leaves, twigs, flower petals — if it was lying at her feet, she picked it up. We chastised her repeatedly to stop touching things, dousing her in hand sanitizer with every rebuke. Your girl was determined, though. When I would flip through the photos at the end of the day, guess who always had a surprise in their upturned palm? I guess I should be thankful it was a wilted flower and not Poppy, Part 2. 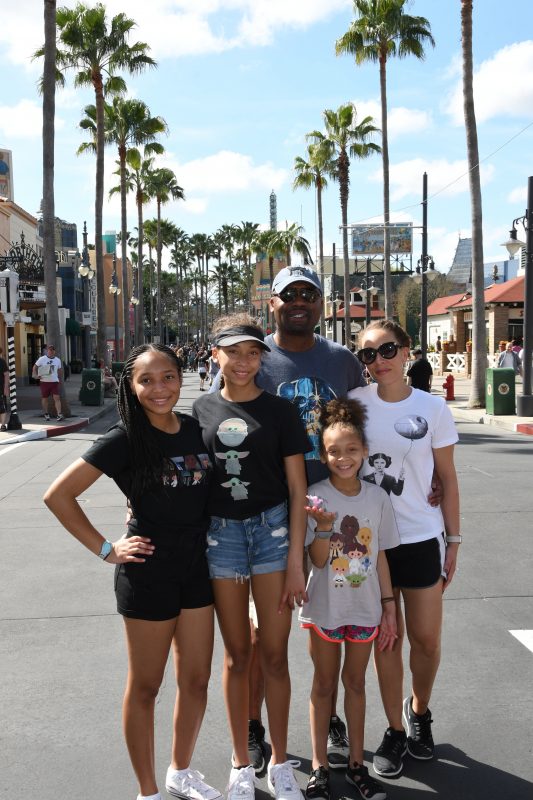 But back to our last evening at the park.  As we headed for dinner,  we reminded V to keep her hands off of the ground. We enjoyed a wonderful dinner at Chefs de France, the girls falling in love with our waiter, Clement, and his accent.  We scarfed down warm baguettes with butter, bowls of bisque, bubbling cast-iron skillets of escargot (yes, even the children!) and plates of frites.   One would think that after such a sumptuous dinner, there’d be nothing left to do but roll ourselves to bed.

We had reservations to keep, though, so instead we rolled on over to the next stop. As we arrived at the dessert party, we saw Minnie Mouse in a meet-and-greet pavilion to our left. We waved at the her, at the people in line snaking onto the sidewalk steps from the The Frozen Ever After Dessert Party.   It was a smorgasbord of Frozen/Disney themed desserts, like cupcakes whose swirls of frosting glittered with sugar and almond horn cookies named after the reindeer in the movie.   We selected some treats to throw on top of already full stomachs and sat back  to watch the stars for a bit before the promised firework show.   As we waited, I suggested to the girls we take a walk to see if Minnie Mouse was still at the pavilion.

We skipped on over to the pavilion, hoping to squeak in a quick photo op with Minnie. Just as we to stepped towards her, a cast member materialized, saying, “Oh, hi friends! Minnie is all done for tonight! I’m so sorry!” and then she made a face like this:

Seriously.  Now, I’ve heard rumors that cast members at Disney can’t break character.  I’ve heard that they can’t say” I don’t know.”  I’ve even heard that they can’t say “No”.   I wasn’t going to put it to the test that night; I’d looked at the hours posted on the cute little sign as we approached — 6:30 to 8:30. My watch said it was going until 8:54. We’d missed it.  We’d missed it by a good margin.

V, though, was not to be deterred. She reached in her pocket, pulling out something small and shiny between her thumb and first two fingers. “What about. . .this?” she proffered.

That she no doubt picked up off of the ground.

To bribe the cast member with.

Without even blinking, the cast member squatted down on V’s level, hands on her knees, again tilting her head ever so slightly. “Oh, friend! Oh my gosh! I wish I could, but I’m so sorry!”

To which V, simply set her jaw in that familiar cross bite, put the dime away, and turned on her heel, walked off. . . into the unknown.