That Time A Tree Fell On the House

**Author’s note** There are a few expletives laced in this piece.  While I’ve read that cursing can detract from the story, I’m relating events as they happened and that includes some colorful language that was used at the time.

It’s been almost a month since I posted last and everything has happened.

And then a tree fell on the house.

Last week Thursday, there was an EPIC storm that blew through #RVA around 10pm. The Hubs and I were in the bed, faces bathed in that pearlescent glow of our respective iPads. I was watching “The League” (meh), he’s watching  O.J. Made in America: Part 1 The kids were asleep and the house had been shut down for the evening.  Despite the chatter from my device, I started hearing some serious wind and rain picking up outside.  What started off as a little bit of drizzle has now picked up significantly in intensity over a matter of minutes.  I turn to the Hubs and say, “Are you hearing this? ”

“Yup,” he says, pulling an earbud out of his ear. “I’ve been hearing it.” Then he turns his attention back to his show.  At this point, I’m still sitting in the bed, marveling at the sounds of nature. The wind is ferocious, its voice loud as it mimics a fleet of 18 wheelers downshifting on our street.  My mind digs into its file folder of sound associations and flips open to a memory of my mother telling me, “Tornadoes sound like freight trains.”

That’s my last thought just as the lights blink out.  As quickly as they cut off, they turned back on. The wind gave an angry shout, the lights blinked off again, and then a massive cracking sound gave way to a thunderous crash as our house shook like the hand of God slapped it.  The Hubs grabbed me by the arm — or maybe it was my ankle, it happened so fast — flipping me off the bed as he yelled, “Get on the floor!”

In the dark, we commando crawled to the children’s rooms to grab M, C, and V, who (mercifully) had slept through it.  Slithering downstairs to the first floor, we piled into the lowest point of the house — the laundry room — and proceeded to wait for the storm to subside.  Keeping the girls comfortable and calm was our priority as we listened to the wind scream and branches scratch and skitter across the roof and exterior walls.

After a while, we moved everyone into the dining room.  Using some blankets from the living room, the girls concocted a nest while the Hubs and I grabbed flashlights to figure out what was going on.

“I hear water,” he said as we made our way back up to our bedroom. Sure enough, a cascade of rain was coming down from the door jamb leading into our bedroom.  While he surveyed that damage, I made my way to the third floor.  Our third floor is separated from the second floor by 15 steps which are book-ended by doors.  I opened the first door and shined the light up the steps, thinking, “This is exactly the point in the slasher movies when the audience yells, ‘Don’t go up the stairs!'”

So, I went up the stairs.

I opened the second door, thinking, “This is exactly the point in the slasher movies when the audience yells, ‘Don’t open the door!'”

So, I opened the door.

Seriously, I’m Black and I’m a female — if this really were a movie, I’d a been a casualty before the opening credits faded to black.

I shined the flashlight around and let the beam pick up the array of scattered toys, Legos, books and so forth. Everything looked pretty much as I remembered it from the other day.  I shined the light on the door to my office.  I hadn’t been up there to write in a few days (that’s another story), but I was pretty sure that I hadn’t closed the door when I left.  And even if I had, I wouldn’t have closed it as tightly as I now found it when I pressed my fingers to it.

This is exactly the point in the slasher movies when the audience yells, “Don’t open the door!”

And there was a big ass tree in my office.

I slowly backed out, closing the door behind me, swallowed the scream that was percolating in my lungs, and eased myself back downstairs.  The Hubs met me on the landing, shining his flashlight in my face.  “You shouldn’t have gone up there!”

What happened after that is pretty much a blur.   I know that shortly thereafter the ceiling in the living room started to leak in several different spots.  We took all of the art work off of the walls. We moved furniture away from the spouts of water popping up (or would that be down?) from the ceiling.  We were collecting water in pots, pans, and plastic party buckets usually reserved for bottles of beer and cans of soda.  Some how the kids fell asleep. At some point, I did, too, from some combo of fear, exhaustion and self preservation).  The Hubs, God bless him, saved all of my photo albums and pictures.  He stayed up, bailing and keeping us safe.

At first light, he and I left the girls safely sleeping to go see what exactly had transpired. Lounging across the top of our house, like La Maja Desnuda, was a giant poplar tree. 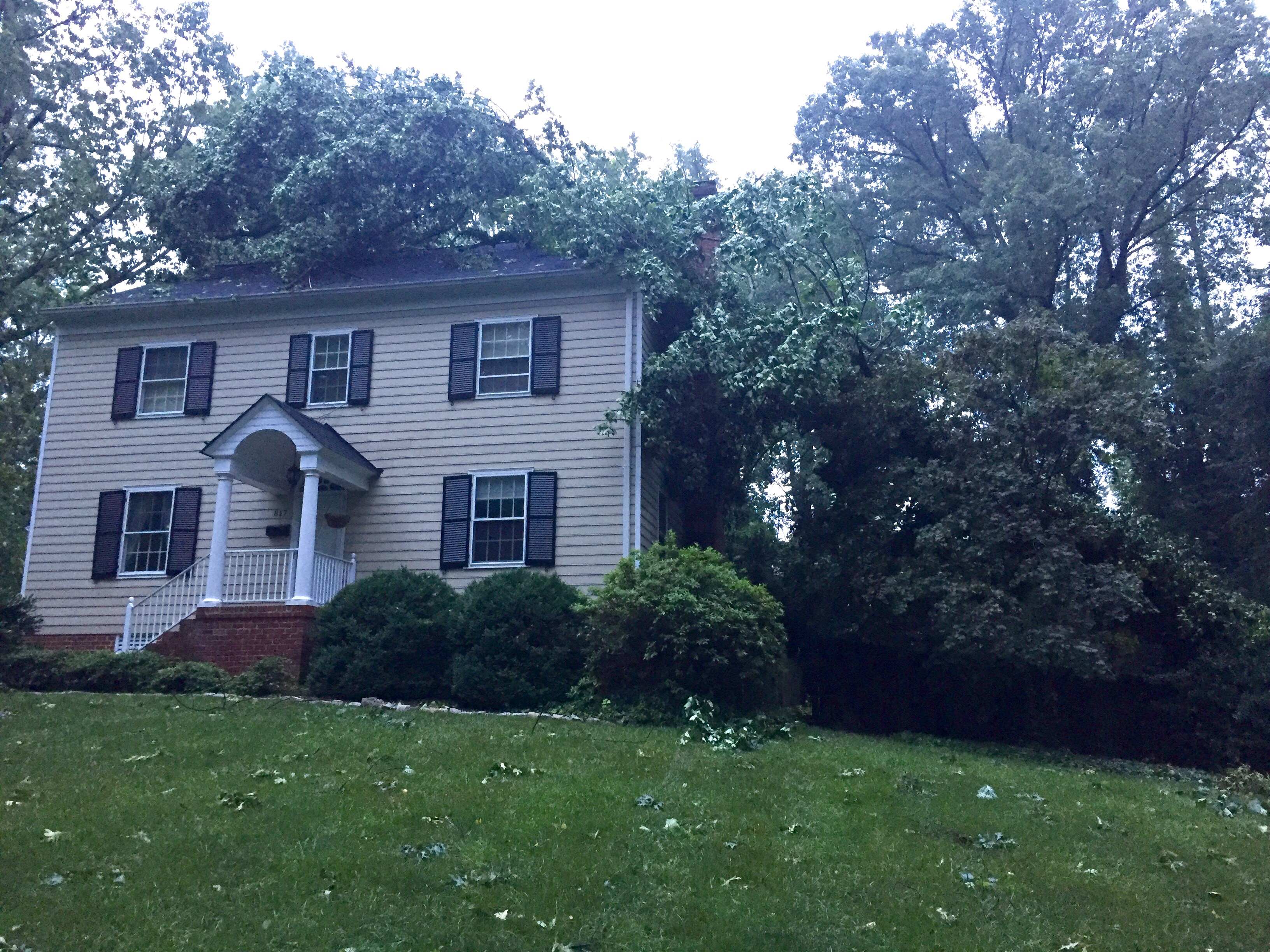 There was a tree, lounging on my roof like, “I’mma just hang for a minute and catch my breath from fucking up your shit. Thanks!”

The Hubs and I did a slow walk around the house to see the extent of the damage.  Extensive would be accurate.  The tree landed on the peak, hit the slope, forked the chimney and punctured the two windows of my office.  It’s a miracle (and I don’t use that word lightly) that it didn’t collapse into our bedroom, which is right below the office.

It’s a miracle, my mother was quick to remind me, that I wasn’t up there working.

So while that disrespectful oak tree was making a home in my eaves and rafters, I keeping repeating to myself, “We’re alive. We’re okay. It’s just stuff.”

is what I said to myself as we began the process of getting the tree removed, filing claims with the insurance company, inventorying everything that was damaged, salvaging what I can, and tossing out everything in the fridge.

is what I said to myself as the five of us (!!!!!) spent Friday, Saturday, and Sunday in a hotel room.

is what I told my parents and our extended family who came for the 50th Wedding Anniversary celebration Saturday evening, which turned out to be the best distraction (thank you, my handsome husband for pressing me to move forward with that because I was thisclose to cancelling).

is what I tell myself when the stress of adulting on a level I hadn’t planned on experiencing has my throat thick with the burn of tears ready to fall.  And again, my brain digs flips through my mental Rolodex before settling on the time when a hurricane blew through Hampton Roads about 8 years ago.  My friend lost her entire home.  I don’t mean a tree fell on it, I mean, the storm blew it apart, ejecting her mother and her daughter into the lake at the back of the property.  They lived. They were okay.

Friends who saw my IG posts and FB posts from the week-end are stunned when I tell them what all transpired.

“Are you kidding?” they ask. “I saw the picture of you out at dinner.  Wasn’t it your anniversary, too? And weren’t you at brunch on Sunday?”

Yes, yes, and yes. Laughing to keep from crying, I guess.