How to Say No Without Saying No 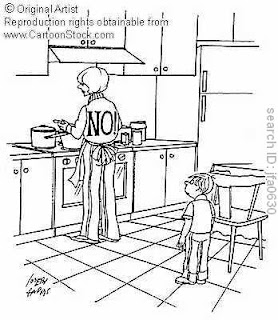 (source)
I don’t know when this happened to me.  I say “no” quite a bit.  Like, a lot.  Like the way a valley girls uses the word “like”.  Like, oh no!
I had read an article in Parents or Parenting magazine a while back where the author (I think it was Peggy Orenstein) said that for one day, she was just going to say “yes”, to whatever her children wanted.  I thought she was crazy like that glue from doing something like that.  Then, the other day when I was feeling kind of sick, I decided to give it a whirl in the interest of self-preservation.
I didn’t agree to every single whim and desire the girls put forth (no, you can’t slide down the stairs on my cookie sheet), but for the most part, if they weren’t going to kill themselves or each other, it was green light city.  The next day, when I was feeling better, I was tossing out “no” like handbills to a house party.  The frequency of using “no” was steadily increasing and I felt like I had some kind of aphasia for affirmation.  If that’s how I felt, I could only imagine what the girls must be thinking.
I realized that I need to adopt a Moto Moto attitude about it: 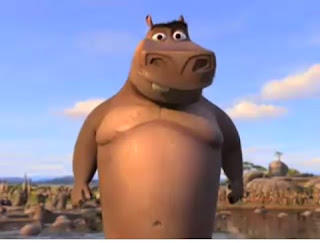 (source)
“I promise the answer will always be ‘yes’, unless ‘no’ is required.”
Then I took it one step further.  I had to come up with some other ways of saying “no”. I instituted a no-ratrorium!  If I was going to say “no”, I had to do it in a way that didn’t involve any verb negations.  Gone were the mustn’ts, shouldn’ts, can’ts, won’ts, and don’ts.  It was going to be tough, but I was determined to succeed.  If I could do it, problems could be alleviated, the threat of tears and tantrums could be eliminated, and peace would reign supreme under our roof.
My “no”s became “How about in a few minutes?” and “Maybe in a little while.”  I started to add things like “Let me think about it, ” “As soon as I’m finished here, we’ll talk about it,” and “That might be a possibility.”  The purposeful vagueness has provided awesome results.  The girls get an answer, which isn’t negative, and I get relatively fuss-free quality time with the girls.
There are times when a firm “No.” is necessary.  For instance, if the girls ask me if they can hanglide off the roof using wire-hangers, double sided tape, and a pair of DH’s underpants, “Let me think about it,” may give them some false hope. In that case, I don’t feel as bad dishing out a steaming plate of “No.” (along with a side of the People’s Eyebrow) in order to shut the door on that foolishness.
Although. . .that would be something to see. . .
IN: ON: February 17, 2011 BY: Hilary 3 COMMENTS
SHARE
Continue Reading