Let me tell you a story.

V and I were in Target about a week ago. I passed two women who were doing their shopping. One of the women had on this really smart outfit — black turtleneck, herringbone shorts with black tights and little black booties.  She looked super cute; her outfit was just so. I told her as much as we passed in the aisle.  She thanked me and resumed talking with her friend. As perused the shelves for my product, I heard the friend remarking that V’s hair looked like the child of one of their friends.

And as the words were coming out of her mouth, her hand was moving steadily forward towards V’s head.  I shifted myself between her and V, saying firmly and clearly, “I would rather you didn’t.”

The speed with which she recoiled and the look that crossed her face — a combination of  incredulity and indignance — you would have thought I dropped an f-bomb right there in among the paper products.

“Oh!” she said.  “Oh!” she said again and whatever modicum of general politeness and decorum that had just passed between us evaporated.

Because I told her not touch my daughter’s hair.

V’s to young to understand it now, but M and C know as well as I do.  Our hair is an extension of our body. I wouldn’t let some random person stroke my cheek, pat my buns, or rub my tummy (someone almost lost a finger doing that when I was pregnant).  I am certainly not going to let someone touch my hair. This is a lesson that I share with my girls and continue to share with them because it is a situation that, sadly, is not a one time thing. What is most disheartening to me is the conclusion that the girls have reached: If my hair wasn’t like this, then people wouldn’t want to touch it.   If my hair was straight, then people wouldn’t want to touch it.

Not long before this incident at Target, my mother had a similar occurrence with someone in her exercise class.  The woman asked to touch my mother’s hair.  When my mother plainly said no, the woman asked, “Why not?”.  Now, my mother can throw an eyebrow better than The Rock, which is exactly what she did as she very succinctly told this woman, “Because. I. Said. No.”

We all know that the hair struggle is real. All over the internet, social media, magazines and television, we see and hear women talking about how to wrangle, manage, and tame their locks. This blog is no exception.  The natural hair movement has steadily grown over the last few years, with particular emphasis placed on how to style one’s hair, the best products to use and the ways in which to encourage health and growth. When it comes to loving one’s hair and having others respect your hair,  it seems that those topics don’t get the same amount of attention.

As mothers, caregivers, sister-friends and such, we do our part to foster self-esteem and self-love in our curly cuties.  The pervasiveness of unrealistic standards of beauty serves to undermine the strong foundations we wish to cultivate.  How can one grow to love and respect a hair type that has been made to be considered “less than” and “distinctly other”? 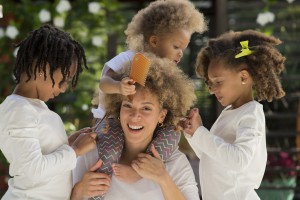 Respect is at the core of this issue.  If we can’t respect our own hair, we can’t expect others to do so.  Even when we do embrace and love our hair, we must actively demonstrate that respect so others will follow suit.  There must be strong role models, who appreciate themselves and encourage others to do so.  There must be resources that promote, uplift and positively reflect what is seen in the mirror. There must be tools given to help our curly cuties navigate situations where they can be made to feel secure and confident in who they are as opposed to “distinctly other”.

I’ve read that when you let other people’s negative words effect you, you are giving away your power. I’ve been guilty of this. I’ve seen it happen to my children.  I want to provide them with tools — arrows in their quiver and at the ready — so that they can respond to whatever anyone says with respect for themselves and their hair, their power fully in their possession. It’s not about creating an air of superiority, nor is it about going H.A.M on someone who just doesn’t get it.  As much as I chafe under the idea that I have to teach someone else how to treat me, thereby teaching them how to treat others, it must be done in order to create and environment whereby natural hair, curly hair, relaxed hair, and all hair types in between are no longer viewed as  novel, but as normal.

Yesterday, as part of a news segment on the Today Show, I learned that a study commissioned by Dove determined that “girls, as young as 5, are six times more likely to have an aversion to their hair if it’s curly. And they’re nine times more likely to believe that if they had straighter hair they would be happier and have more friends.”*

This particular nugget of information was part of a larger discussion of Dove’s new campaign to help girls love their curls.  In addition to Dove’s findings, Nikki Walton from www.CurlyNikki.com was featured.  Walton, a licensed psychotherapist, author, professional blogger and naturalista, weighed in on the issue, pointing out that the lack of self-esteem for one’s hair has been and continues to be an issue in the community.  Citing the aforementioned unrealistic standard of beauty, as well as the psychological root that often hinders personal growth, Walton’s message was clear: If these feelings weren’t really an issue, there wouldn’t be a need for campaigns such as Dove’s.

Listening to the examples given was touching, but I challenge you to watch this commercial and not experience all manner of feels.

I was good until the big musical reveal to the girls.  Throat got a little tight.  Got a little verklempt.  Can you imagine how different a conversation this would be if something like this had been made 10 years ago? 20 years ago? We might be having this conversation at all.

Last week, I talked about each one, teach one, with respect to having the girls learn how to do their own hair.  Respect of one’s hair must be included in that lesson as well. . . maybe a few shaolin moves for those who get too close.