When I lacerated my ankle two years ago, it was undoubtedly the most humbling experience I’ve ever had.  I had to rely on others. I had to ask for help. I had to be taken care of and I am not a good patient.

The saying goes “time heals all wounds”, and to some degree that is correct. What they don’t tell you is that time heals all wounds differently.  I was naive.  I honestly believed that the surgery to repair my ankle would restore it to its former ability.  That’s not what happened.

I don’t ever want to be perceived as anything other than capable, but even superheroes have weakneses.  Because of this, because I’m proud, I went months before letting my doc know things didn’t feel quite right. My tendon was encased in scar tissue, thereby preventing me from pointing and flexing completely. My range of motion was limited.  According to my doc, despite my youth and high level of fitness, there wasn’t anything else I could do to improve the mobility except another surgery.

I didn’t relish another trip under the knife, but I wanted to walk. I wanted to run. I wanted to be myself again. So, I had the surgery to free the tendon.  I went back to physical therapy. I pushed myself to regain mobility and strength. I found myself doing better and better until the procedure was a memory with softened edges in the back of my mind.

In the two years since, I’m stronger and fitter than I’ve been.  I’m working out harder, but there are times when my gait isn’t very clean. There are times when I trip over nothing at all.  I’ve got a persistent ache where the procedure was performed.  I feel like if I could just get a really deep stretch, pull my toes as far forward as possible, everything would snap back into it’s proper place. Unfortunately, that’s not going to happen.

After a November fall on a Carytown sidewalk over nothing but my inability to completely lift my toes, I called my doc again.  Despite my hours in the gym, I can’t exercise this injury away. I can do calf raises and resistance band training for days, but what I’m working with is what it is.  My doc said maybe another surgery. . .

I made the December 30th appointment.

The new doc gave me a thorough examination. He watched me walk, he videotaped me walking. He tested the strength of all of the tendons in my foot. He had me rotate, pronate, flex, and extend. He palpated, he thumped, he thwacked. He pushed and he pulled.  He concurred that there was nothing else that I could do to improve the situation.  He concluded that what I’m currently working with is what I’ll be working with indefinitely. He offered a three prong surgical approach in order to provide me with between 10 to 15 degrees of greater range of motion.

I thought about a November fall on a Carytown sidewalk.

My surgery is schedule for April 13th.

How can I do this?

How can I not?

I’m in my late 30’s, with limited range of motion in my leg that has affected my gait and makes me paranoid that I’m going to trip and fall at any given moment. Do I want to live like that for the next 30 or so years? Nope.

I’m angry, though.  I’m angry that it was my own carelessness that broke a glass pitcher, which I didn’t dispose of properly, which I ended up tripping over, which sliced right across the extensor tendon, which brings me to this point in time.  I’m angry that going on three years later, I’m still dealing with this. I’m angry that my career as a foot and ankle model is over (I’m kidding, we all know I’m a hand model – -).

A few days after I made the appointment with the new doc, I was skimming through my IG feed.  My friend, Billy Parker, recently had launched a movement called Help the Bear and was using social media to spread the word. Curious, I clicked around to see what I could find.  Help The Bear comes from the saying “If you ever catch me fighting in the forest with a grizzly bear, Help the Bear.”

I clicked around some more and discovered that throughout his career as a professional football player, Billy has had his share of challenges and obstacles. I’ll leave you to read about them here, but the take-away is that you see him standing before you because he chose to stand up one more time.  He says,

“What is understood is that one should not worry about me, because I am going to defeat the Bear. The Bear might seem like an unbeatable opponent, but it is no match for me.  I will find a way to win. “

Sometimes, you get a hand up when you didn’t even know you needed one.

This ankle injury and these surgeries are my bear.

I can be angry.

I can be a little scared.

But, I can stand up one more time.

I can grow stronger.

So, if you ever catch me fighting in the forest with a Grizzly Bear, Help the Bear. 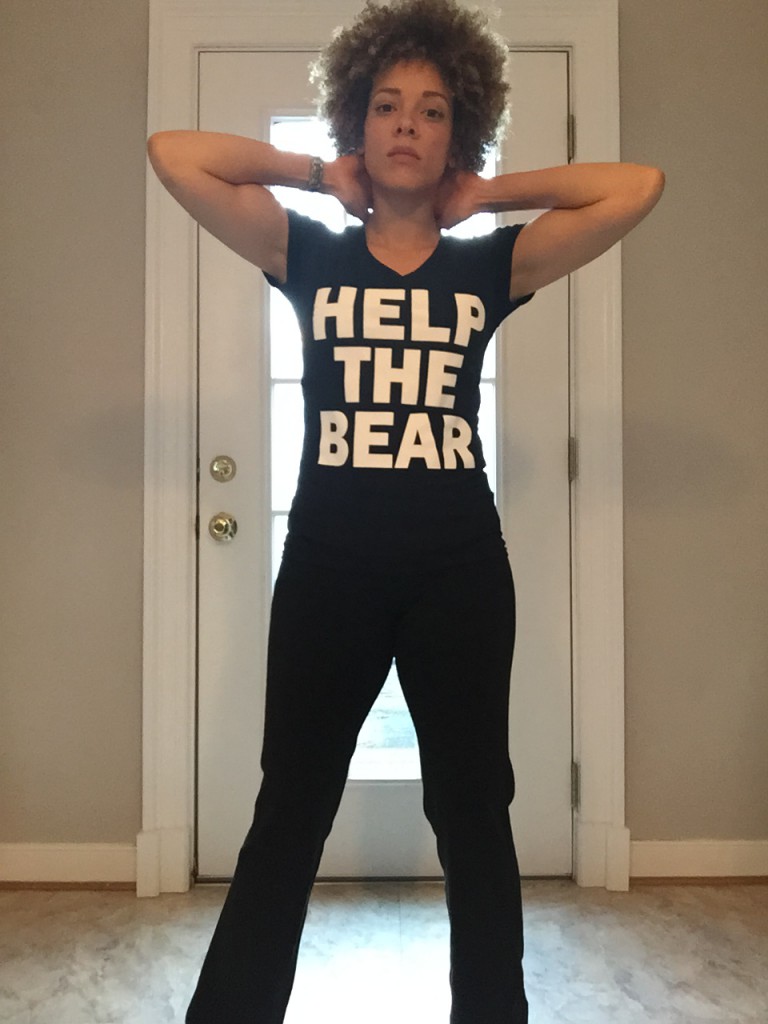