One thing that I have come to appreciate at Mo’s school is the ease of drop off and pick up. You just roll up to the front door and lovely teacher comes out, opens your door, unbuckles your kid and plucks them out. At the end of the day, you roll up, another teacher comes out with your child in hand, opens the door, and deposits them in the car. It’s a great system, but like most systems, there is a flaw.

By the time I pick Mo up from school, the pick-up line is pretty short, no more than two or three cars deep. On some days, and you never know which ones that will be, the cars snake out of driveway and into the street requiring some degree of careful maneuvering on the part of others trying to navigate the roads. On days like that, parents are instructed to form a second line to the left of the original line. The original line, upon seeing the formation of the second line, is to allow the cars of the second line to merge in as space becomes available.
The school was kind enough to even include a diagram of this process in the student handbook. 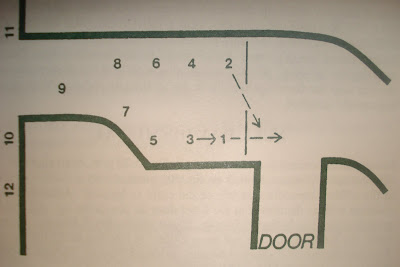 Of course, if parents actually read the student handbook, we wouldn’t have kerfuffles like we had on Friday.
It turned out Friday was one of those days when everyone arrived at pick-up at the same time. A second line had already formed and all cars were jockeying for position. There was enough space for me to be the tail of the far right line, so that’s where I hung out waiting, waiting, waiting for some progress. Another car pulled up behind me and we continued to wait. Co was in the backseat, being placated with some Nilla Wafers, but they were dwindling with an alarming rapidity and believe me, Co can go from pleasant to down right medieval when there is a lack of snacks. We needed to get Mo and get gone.
Things started moving up ahead on the left hand side, but not the right. I know I hate having the tail of my car protrude into the street, so I did what I thought was a neighborly thing to do, and merged to the left to allow the car behind me to pull fully into the school driveway. There was an Outback ahead of me and a Taurus to my right. The Outback was trying — unsuccessfully — to merge in front of the Lexus that was just ahead of the Taurus.
The Outback had been thwarted not only by the Lexus, but by an Odyssey just ahead of that. Clearly frustrated, the Outback stayed in the left lane, but shot ahead so that it was parallel to the first car in the pick up line. The driver got out and began waving her arms at the teacher who was bringing the children out to the cars. Some kind of exchange occurred with lots of gesturing and finger pointing at the various cars in the right hand line. When it was all said and done, the driver threw her hands in the air and leaned back against her car waiting for her child.
Now, I’m still in the left hand lane, waiting for a break in the right lane so that I could merge in to pick up Mo. But, every time I let my foot off of the brake to ease ahead, the Taurus to my right gunned their engine and pulled even with me. On the third time I eased forward and slightly turned the car towards the right, the Taurus gunned their engine and leaned on their horn as if I’m careening wildly into their path.
Um, don’t you read the handbook? I’m trying to follow the diagram and merge here! I tried one more time and again, the Taurus shot ahead, barely missing the bumper of the Lexus. That just tore it for me. It’s not like this is my first experience with parents reluctant to let me or another driver move ahead of them in line. But Friday, I wasn’t having it. So, I pulled ahead, just behind the Outback, got out and waited. The driver of the Outback was still waiting for her child. She turned to me and started talking as though we’d been having a conversation from the minute we’d pulled into the driveway.
“And another thing I don’t understand is why zey can let only zome people go ahead and not others, you know what I’m zaying? I was here first and zis car (pointing to the Lexus), she will not allow me to move into ze line!” (her accent was Belgian or French or some derivative that made even this diatribe pleasing to the ear). We spied the teacher bringing out the little girl belonging to the Outback driver, who then begins to repeat VERBATIM the exact same speech she just gave me. And she kept repeating herself. Twice at least, steadily raising her voice over the protestations and explanations of the teacher. When she started in a third go round, the teacher said, “That Lexus let in two cars before you! You were not here first! Listen to what I’m trying to tell you!”
I’m pretty sure I heard the French equivalent of “Kiss my grits” as the driver turned to deposit her daughter into the Outback, while the teacher simply said, “Well, you have a nice day,” and turned around to ferry out the next child.
The Taurus had pulled up to the front of the door, all but certain that they’d saved themselves an extra minute or two off of their pick up time by boxing me out. Too bad for them that the teacher brought Mo out before their little person. The teacher handed Mo over to me with an apologetic smile and said, “That Lexus had let several other cars in before she got here. I’m not a traffic cop, you know.”
I wish I had told her I’m not someone who gives a rat’s patoot, but Co was out of Nilla Wafers and we had to boogie.