Okay you guys, I’m pulling back the curtain. I’m almost embarrassed to show you this.  This is my linen closet. 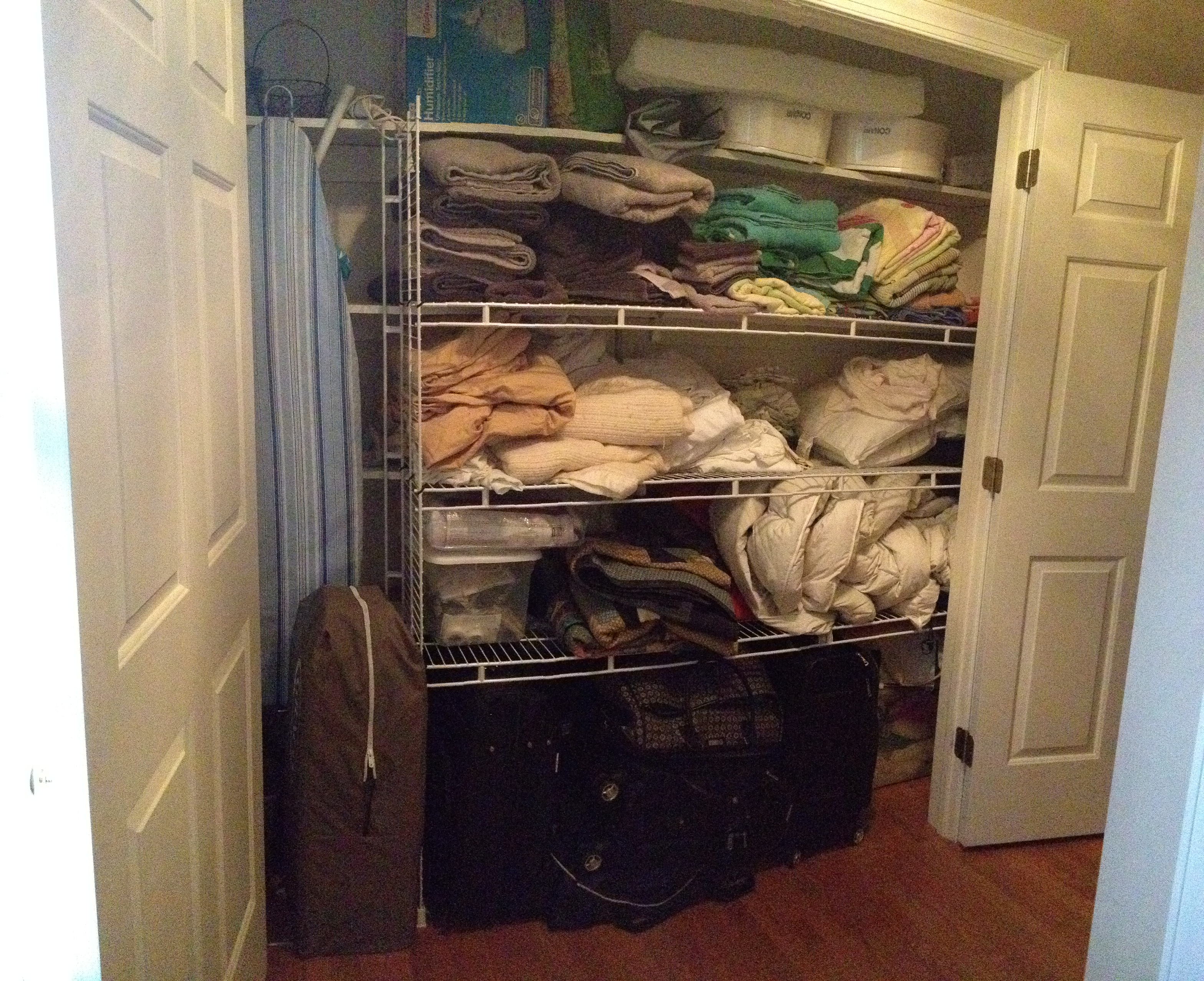 I think I’m pretty organized person.  I’m someone who has their -ish together, about 85% of the time.  But, when I’m feeling myself and am in need of a reality check, I go pull some towels of the linen closet and let the bedsheets, washcloths, and other household detritus come tumbling down around me.  Rather than just folding things nicely and putting things away — which, I did when we moved in three years ago — I’ve just started shoving stuff onto the shelves in a semi-organized system. Towels on the top, linens in the middle, sewing machine paraphernalia, quilts, old pillows on the bottom shelf, and luggage, a pack-and-play and off-season clothes on the floor.  See? It’s organized in that I know what’s where.  It’s not organized in that it looks like I just tossed stuff in and slammed the door shut.  .  .  .probably because that’s what I did.

This thing has gone completely off the rails.

I love organization. A place for everything thing and every thing in it’s place. I’ve always been that way.  I like knowing what I have, where it is and where it needs to go after I’ve used it.  That’s part of the reason why I’m forever haranguing the girls about putting something away after they’ve used it.  Not just because I don’t want to clean up, but because who doesn’t love neatness and orderliness? Growing up, my desk in school was used as a model to emulate (yes, I was that kid).  My locker was a thing of beauty: books color coded by spine, binders stacked by increasing widths, and even my pictures, comics, and motivational quotes that adorned my locker door where organized in an orchestrated arrangement to appear haphazardly thrown up.

I love baskets and fabric covered bins to store everything form hair supplies to toilet paper rolls to magazines.  I want my stuff corralled and I want it to look good. 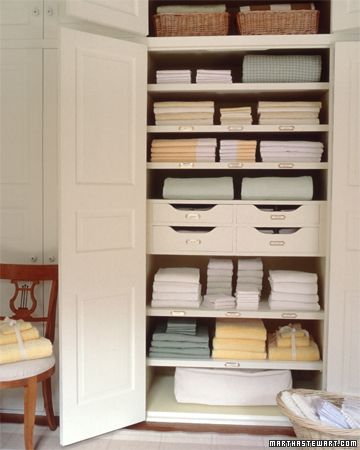 I love folders and labels. Satisfaction is emptying out my hanging files and replacing old folders with new ones affixed with labels hot from the printer.  *squeee* !   In the kitchen, I love nesting bowls and tupperware with interchangeable lids. When I decided to give the linen closet it’s proper make-over,the pantry was roped into the adventure as well.  What started out as just putting some groceries away after a failed trip to Target became a foray into putting a little polish on a closet in the house.

Sadly, I didn’t take a before and after of my hard work, because at the time, I hadn’t planned on even tackling the job.  What started out as making room for some new groceries became a huge undertaking of cleaning shelves, removing bags of cereal from boxes, finding the aforementioned tupperware big enough to hold all the loose snacks, flakes, and crispies floating around.  A normal person would have thought it out, measured shelves, checked what they already had and  you know, had a plan, before doing something like that on the last Sunday night of Christmas break.

Suffice it to say, the kitchen was already in disarray between the grocery bags, my multi-tasking making dinner and the next day’s lunches.  Why not add another log on that fire? My tupperware collection is extensive because my mother-in-law likes to bring food with her when she visits.  Some things get frozen, some things get eaten right way, but regardless, the tupperware never makes it back home with her.  I’ve tried to send it back with no luck.  The stuff kept multiplying.  My cabinet became full of more tupperware than I could possibly use. Until, I decided to clean up the pantry.

What is crucial to understand in this story is that this all happened on Sunday, like I said.  Sundays are the days when we really dig in and  get ready for the coming week.  What should be pretty mundane tasks that take little to no time, ends up becoming this bizarre quest for me to suddenly organize everything. Every Sunday without fail, at some point in the day, I start organizing stuff.  It’s like I’m doing a tabla rasa on the past week.  If I can get myself and my stuff and my people organized going into the week, then we’re primed to kick butt all week long!  And every Sunday I find something to organize — the toy box, the playroom, my sock drawer —  but the linen closet is never on that list.

So, the last Sunday of the holiday break. There were football games on, Christmas paraphernalia to be stored, hair to be done, clothes to be lain out, SO many things to be done. I threw open the doors to the linen closet for fresh towels, had a brain cramp and decided that the closet needed to be organized.  I got out my tape measure and measured the height, the width, and the depth of the shelves.  I measured for all the compartments that I thought I was going to need. I got out my clipboard and set out to make a list of the type and size of bins and baskets that I thought it would take to get some order and clarity into the linen closet and some satisfaction into my system.

In my head, I had this vision, partially aided by the flier that came in the mail from Target, imploring me to come and shop their New Year Sale. I mean, how timely right? It’s the new year and people have resolved to get their -ish together — literally and figuratively.  The image that they chose for the flier was a beautifully organized linen closet.  Bins, baskets, rolled towels, labels all facing the same way with the contents of each container artfully written in scripted font.  I took a look at that and thought, “Oh yes, it will be mine!” New year, new me, new linen closet. So, on with the measuring, list making and the trip to Target where I took hold of a red cart, piloted to the Home section and. . .

was completely overwhelmed because I really had no idea what it is that I want.  Do I want the towels for our bathroom to be rolled? Should the kid’s towels be rolled? If so, how many baskets do I get? Do I get bins instead? What about wired containers versus the sea grass ones? If I go with fabric lined, which fabric do I choose? Do I even have a color palette here or are we going for a minimalist look and go clear or opaque? Does clear or opaque even count as a slot on the color wheel? What about the toiletries and cleaning products? I don’t really keep our products in the linen closet, I keep them in the bathroom under the sink in their own little bin. So does that mean I replace the existing bin or try to match it to new bins? Does that mean I have to switch? Does that mean I have to move the bin from under the sink to the linen closet in order to make it work? What if I get some baskets, but then you can’t see them because the ironing board is hung on the shelf rather than on the door? Does that mean I should get towel racks to install on the inside of the linen closet? How did I end up in Health and Beauty and why is there a Chestnut Praline Latte in my hand?

And then pffft! My head exploded.

When I came home, I was in a funk and disappointed at my lack of progress.  I started to put away some of the grocery items and opened the pantry. I looked inside, it was ugh and no better off than the linen closet, which brings us to how the pantry got a mini make-over before the linen closet.  Granted, it doesn’t quite look like this: 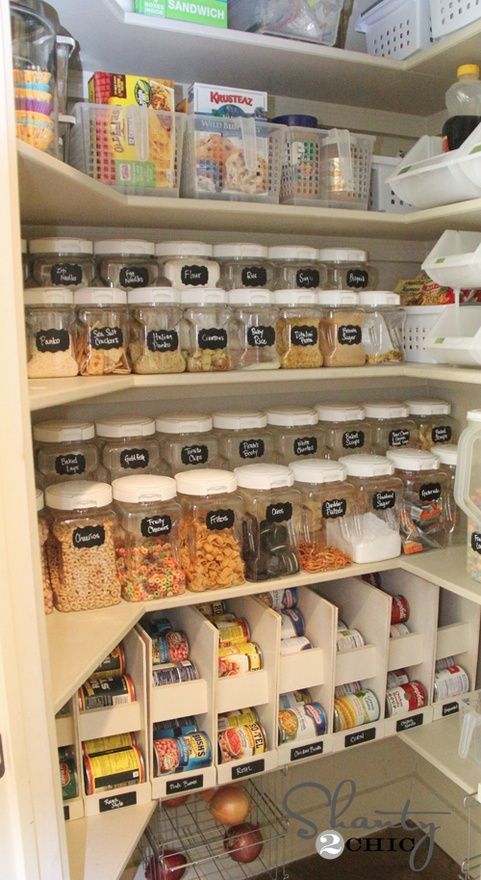 but, I made enough of a difference that when M opened the door looking for dessert, she said, “Whoa, the pantry is like really clean now. It looks awesome!”

I didn’t really think anyone would notice, but apparently my hard work showed.  An organized pantry and high praise from my daughter? Double win.

Start Fresh Sunday — yet another challenge of my own creation.  Seriously, though, if I can just get the slate clean on Sunday, we can go into feeling full charged.

I just need to get organized.

I want to take all my organizational pins and make it happen in real life. You know, if you like a pin or re-pin something, it should just appear in your closet, your fridge, or whatever.  Why haven’t we developed this technology?!

The linen closet, that prickly beast that I’m trying to get my arms around hasn’t bested me forever.  I will create a closet that is both aesthetically appealing and functional, like the myriad of pins I keep clicking on and drooling over.  Maybe I can get it together by Sunday.