I’m not going to lie; parenting is a tough business.  I’m constantly wondering if I said the right thing at the right time or if there are enough fruits or veggies in their lunches. I worry that they’ll never ever learn to do their own laundry if I keep doing it and that if I refuse to clean it, they’ll let dried toothpaste build up in the sink like a carapace.  I worry that the only time they aren’t fussing with one another is when they’re sitting, glassy-eyed in front of the TV. Oh, the fussing! The bickering! The crying — them, not me. And it’s over mundane, trivial things like, who finished the last swallow of apple juice, who gets to sit in the front seat, and whose turn it is to change the toilet paper roll. Honestly, I think they would let themselves air dry rather than take the initiative to replace the roll.

It feels like there’s always some squabble going on.  Each time,  I’ve tried a different way to squash it before it gets to DEFCON 1.    I’ve talked about walking away when someone starts to get on your nerves.  I’ve used the get-a-long shirt. I’ve had them hug-it-out. I’ve had them hold hands while they tell each other what they love about one another.   I’ve had them use I-messages.

An I-message is statement to express a problem without assigning blame.  It’s called an I-message because they start with “I feel [felt]” and makes it about the speaker, rather than about someone else.  This approach has hits and misses, primarily because when one of the girls uses an I-message, the recipient fires back with an I-message of her own about the first I-message.  Then we’re back to where we started.  To combat that, I’ve been having the girls write out their I-messages and exchange them.  They can’t reply to what they’ve received and some sort of detente is reached.

It’s a work in progress, as is the work I do with V after school.  We’re practicing ABCs and 123s, we’re working on shape identification, and letter sounds.  I’m reinforcing concepts that she’s getting at school and she gets to feel like she’s a big girl doing homework just like her sisters.

The other day, she will made a worksheet of her own and asked me to complete it.  Since we’re still working on penmanship and math facts, her numbers were backwards and her most of her sums were incorrect.  Still, she  really wanted me to do the sheet with her.

Yes, I wanted to encourage her to practice writing her numbers and learning her sums, BUT, she can’t learn them if she’s practicing incorrectly. Made sense to me. Did not go over well with her.  I drew upon my reserves of patience to show her what I meant. I tried not to say that she was wrong or incorrect.   I heard myself saying, “Look at how it looks in the book and look at how you’ve done it. Let’s make it look like the one in the book.”

I suggested we copy it over together.

I started to re-copy it, adding little triangles, stars, and hearts to give her visual representation for each group of numbers.  She angrily pushed her pencil across the table.  I began to cajole her into at least trying to mimic what she saw, explaining why we’re doing this.  She reached deep into her guts, and blew out a “No!” so deep, so throaty, so completely and utterly fed up and frustrated, it left my feelings checking themselves for injuries.

With fingersnap quickness, I said, “Alright, we’re done. You cool out in your room until dinner.”  I gathered up the papers, the pencils, the workbook.  I put them away.  She started sinking further and further down in her chair, kicking her heels against the legs before hurling herself away from the table to stomp up the stairs as heavily as her size 12 feet could manage.

Later, when she came down for dinner, her face twisted into a pucker to keep herself from smiling, she handed me a folded piece of notebook paper. “This is for you.” 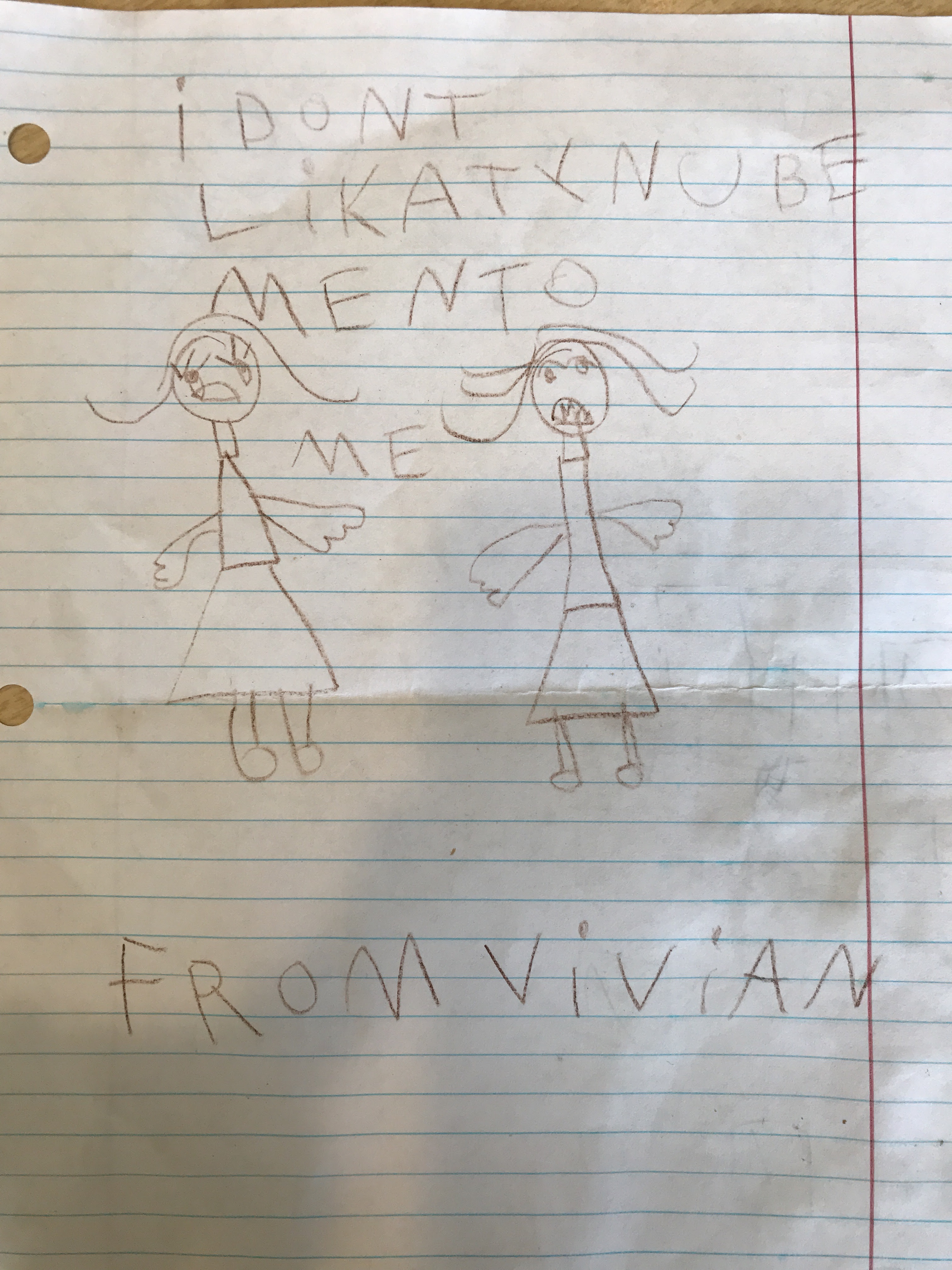 She’s on the left with the downturned mouth and single, Denzel tear.

I’m on the right looking like Jaws (the shark or the baddie from the Bond films, take your pick). Apparently, when I’m mean, my hair goes straight.

While I really wanted to roll my eyes at this, I have to give it to V.  At five years of age, she got a grip on the tantrum that was threatening to blow the beads off her hair and instead, chose to send me an I-message, complete with visual aid.  That’s a skill some adults can’t even master.

Parenting is a tough business, but every now and then, there are these gold star moments that remind you that you’re doing just fine.